Ever since the first humans painted ochre and charcoal on cave walls, the process of data capture began. A story told over many generations in real-time suddenly had the capacity to transfer between generations of unrelated humans spanning millennia.

The written word arrived, enshrined in books, resulting in the sum of all human knowledge growing rapidly while spawning new and complex ideas to be built upon and shared.

With the advent of computers and the internet, unfathomable quantities of data could be stored and subsequently transferred at the speed of light.

The proliferation of computational data in all the various final forms—but at its essence just ones and zeros—has meant that all human work can be preserved. A time-capsule of near-infinite scale, accessible through hand-held panes of glass that live in our pockets.

The capture of data has transformed how we operate as humans. No longer are we beholden to communicating at the same time. We are able to move from being synchronous to asynchronous.

Synchronous = happening, existing, or arising at precisely the same time
Asynchronous = not simultaneous or concurrent in time

Phone calls are a classic example. What was once the remote communication method of choice, has now turned into a mostly unwelcome disruption. Moving to text, IM or email takes communication from real-time to own-time; from synchronous to asynchronous.

Think of these other examples:

The common thread between all these examples is that they happen asynchronously, in your own time. They are enabled through the asynchronous capture and delivery of data. They also morph from being 1:few to 1:many; a crucial tenet of scalability.

From the rudimentary cave painting to now, we are continuing the march from real-time to in your own time.

With time being our most valuable asset, the market has shown its willingness to pay for asynchronicity.

Perhaps the next big idea will move another industry from synchronous to asynchronous. What are things that happen in real-time that would benefit (by being cheaper, faster, better, more efficient) from becoming asynchronous? 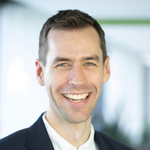